The „3D Map Generator – GEO“ is especially created for illustrating complex geographical 3D maps. In opposite to the current „3D Map Generator 2“ the new „3D Map Generator – GEO“ can be used to create big 3D maps in smaller map scales. With a few clicks it is possible to generate isometric 3D maps in 3 different orientations with heights and depths in the terrain. As basic shapes there can be used text layers, vector shapes, Smart Objects or one of 54 vector country shapes. For designing the map there are different new tools, textures, effects, brushes and 37 icons and elements available. The generated 3D maps can be edited and redesigned for unlimited times. No layers will be flattened. Of course it is also possible to put own textures onto the surface and to use own brushes, effects, icons or other elements. 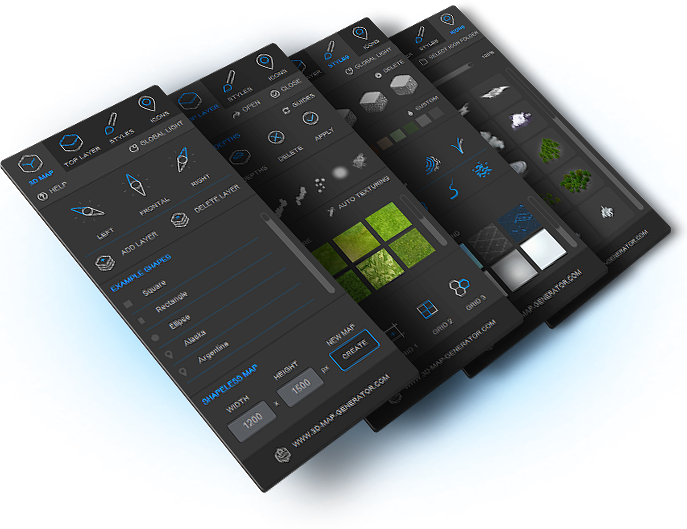 The „3D Map Generator – GEO“ creates professional 3D maps
which are perfect for:

See the Features in Detail

See how it works!

The 3D-Map-Generator-GEO is available as a Photoshop CC plugin with an easy to use surface. GEO creates professional 3D Maps in 3 isometric orientations and is purpose-built to display geographic surfaces. With just a few clicks it is possible to show heights and depths of an area and additionally there are many different tools, textures, icons and elements availbale to design and refine the surface. In GEO there are combined the experiences of over 4 years 3D Map Generator.

All details and purchase options can be found on our envato homepage.